Am I the only one feeling this way???

I normally try to avoid anything controversial on here, so I'm truly going out on a limb with this one. Hopefully I won't be sorry that I did.....

There's a pervasive ugliness in the world right now, that seems to be getting worse by the day. The examples are numerous and widespread.The man who took it upon himself to advise the news anchor about how offensive her weight was to him and his hollow offer to help her "fix" herself. The kids who thought it would be funny to nominate an outcast girl to homecoming court just so they could make fun of her. The conversation I overheard in my grocery store last week where a teenage boy explained his extreme hate for a well known NFL quarterback. His exact words were "man I wish our team had a bounty system. I'd love to see ______ taken out of the game permanently." I'm not sure what concerned me more; the coldness of the boy's statement or the lack of concern from the person he said it to.

Our culture seems to be on a downhill slide into a "can you top this?" of negativity. No where does this seem more prevalent than in the current race for president.

(NOTE - This is not a post regarding the promotion of my beliefs, or my support for any particular candidate - simply my feelings regarding how we are treating one another.)

The negativity I'm talking about isn't even really coming from the candidates themselves; more from the voters who are supporting them. This negativity was never more clear to me than in hearing that a certain popular political commentator used the word retard not once, but twice in twitter posts criticizing the president. That word makes me cringe. The post may not have been aimed at me, but to someone who has a sibling with Down's Syndrome, it was shockingly offensive. And that more than anything seems to be the goal of political discourse right now; to shock and offend anyone who doesn't agree with you.

The explosion of social media in the last four years has brought a whole new side to this that in a word is ugly. In the past few months the amount of political posts has increased from a slight hum to a deafening roar. Here's what I've noticed - everyone is passionate in their beliefs and EVERYONE is right. There are no shades of gray with anyone. It is all or nothing. You are wrong and I am right. If I yell louder than you, you'll change your way of thinking. Statuses are littered with quotes, captions, pictures, and cartoons, all

aimed at making a political statement. There seems to be a theme with many of them. Instead of say educating or informing someone - they mainly seem to be about offending the "other side." Let me make it clear that I see this coming from both sides. The number of days left until the election seems to be in direct correlation to how nasty the posts are becoming. Especially the ones that attack religious beliefs or that start with "Only an idiot would vote for _____." How in the world do you think you're going to influence another person's way of thinking by insulting their intelligence, gender, religion, mother...etc, etc, etc.....??


The sad thing in all of this is that I consider those I see doing this to be wonderful, amazing people. And some of the people who I see posting comments, (again from both sides), are people that I could see really liking each other if they ever met. But if your only basis for being friends with someone is shared political beliefs, then you're going to miss out on a lot. There are things that I like about both candidates and their platforms, and there are things I don't agree with on both of their platforms. I don't think it makes the candidates evil, stupid, or horrible people. Nor do I think that about anyone who chooses to support either of them. Everything is a matter of opinion and everyone interprets things differently. Freedom of beliefs and freedom of expression - they're part of our constitution, so why do we persecute each other for them when it comes to this? There are so many factors involved with someone becoming the president of the United States that it's unrealistic to think that someone could agree 100% with one candidate's beliefs. Most people will tell you that it's going to be based on what is most important in their life at that time. The person who lost their job and had their home foreclosed on will most likely be more worried about a candidate's economic policy than their environmental policy. Likewise, a person struggling with a serious health issue is probably going to focus more on a candidate's health care proposal than their foreign policy platform. The parent's who have a son serving in Afghanistan will likely be more interested in a candidate's foreign policy platform than in their economic platform....and so on and so on......The parent focusing on that child in the military isn't sexist, or stupid, because they aren't thinking about a woman's right to birth control being threatened. They are just dealing with the fact that their child is in danger and they can't think about anything else. Just like the woman going through a serious medical crisis isn't uncaring, or heartless for trying to figure out how to keep up with medical bills, but not being focused on trying to save rain forests from depletion. She's tired and again, just focused on what is most important to her at the time. There is no one candidate who is going to fit everyone of your beliefs. If you find that person, then I am amazingly impressed.

We pride ourselves on individuality, we tell children to be leaders and not followers. We reward thinking outside the box. So why, when it comes to choosing one person to be the leader of our amazing nation, do we ostracize, criticize and for lack of a better term, crucify anyone who doesn't follow our way of thinking? Why do we refuse to listen to each others concerns? Why are we more interested in snarky, condescending comebacks, than in engaging in a meaningful explanation of what's affecting us most at that time? I know many people who say, "I tried to have a conversation, but when they can't get their point across they revert to name calling." And again IT IS FROM BOTH SIDES. It amazes me the people who cut someone out of their life, or write off even getting to know them, solely based on another person's political beliefs. As I said before, I could almost guarantee that if you got some of these people together (minus all the political rhetoric) they'd find they actually (GASP) like each other and could find some amazing common ground. A perfect example would be the friendship that sprung up between Bill Clinton and George Bush Sr. after they both left the political world. It saddens me to see how politics can turn human beings so against one another.

I'm sure there will be people who feel my way of thinking is pretty naive. I'm not saying that there will never be disagreements when it comes to politics. What I am saying is can't we find a way to discuss our differences without reverting to 5 year old (or even worse) behavior?

Maybe in the weeks to come take a minute to think about this and try to consider the other side's way of thinking. Before you post/tweet that article, cartoon, slogan, etc., take a moment to think about what your point is. Before you make a snide comment in response to another person's post, take a moment. If your only goal is to (even inadvertently) hurt, offend, or anger someone else - someone who you may in fact care about an awful lot about - ask yourself this question. Is it worth it? Is there a better way to express myself and my opinion; a way that will educate, inform or enlighten? Is there a way to keep the humanity and discard the ugliness?


That's all I'm saying  -  just take a moment......because when election day is over, no matter who has won, this country will still belong to all of us and we need to stand together as one nation. 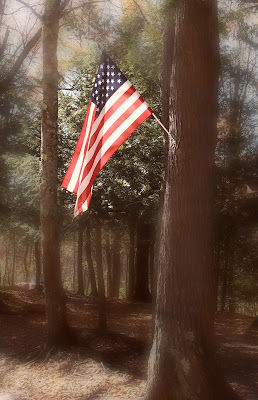