#1 People say the strangest things...
Overheard in the doctor's office waiting room:
Husband and wife discussing pain tolerance:
Wife - "I just don't think you have a very high tolerance for pain."
Husband - "Yeah I do. I had hip surgery. You've never gone through anything like that. The only thing you've gone through that you could maybe compare it to would be child birth....I guess."
I'm thinking he was going to experience a whole new kind of pain later that day.....
#2 Retirement can make you do some funny things.
My father in law retired back in October and like many new retirees, he's been enjoying it to the hilt. He travels, goes out to breakfast with the guys, and takes naps when he wants. But lately there have been signs that perhaps he's getting a little bored. He decided to try baking......a cake......just to see..... if he could. 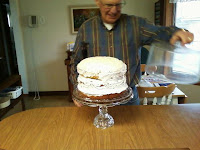 This was the picture hubby sent me at work.....as you can see it was not just a cake, but a 3 layer cake. Let me make this clear......he made 3 separate cake mixes and then made one HUGE cake out of it. It was so big that he didn't have enough frosting for it. He had to use cool whip for the bottom half and then the homemade, (yes, he also made his own frosting) cream cheese, frosting on the top layer. It fed 9 of us and there was still half a cake left!! We're pushing for him to find a job......and soon!
#3 Everyone should have a Kevin Costner as their friend.

As most people know by now, Whitney Houston's funeral was yesterday. I viewed a small portion of the ceremony, in particular, Kevin Costner's extremely moving tribute. He spoke, not as a movie star, but as someone struggling to hold it together at the funeral of a dear friend.
One of the stories he told involved Whitney's screen test for the movie "The Bodyguard." As he pointed out, even as popular as she was at the time, she was still required to try out for the job, as she had no acting experience. At one point it was determined that it wasn't going to work out, as she would be on tour at the time the movie would be shooting. Kevin Costner was so sure that she was right for the part, that he convinced the studio to postpone things for a year. Even after all of that, she still had to try out for the part. He met her in her dressing room the morning of the test, where she expressed her concern over being able to do this. As he put it, she wondered if they would like her enough. After reassuring her that she'd be wonderful and that he knew the part was hers, she asked for a few minutes by herself. After about 20 minutes, she arrived on set. Four minutes into her test, there was a call for a break. Kevin took Whitney aside and asked what she had done during the time they had waited, to which she replied that she was just thinking. Kevin took her back to her trailer and stood her in front of a mirror. As he explained during his speech, Whitney had removed the makeup they had used on her for the test, in favor of her own, thicker, much heavier, stage makeup. She'd feared that the makeup they used didn't cover her imperfections enough. Unfortunately her makeup was not made to withstand the hot lights used during the test shoot, and consequently it was now running down her face. Kevin said Whitney was mortified and asked him if anyone had noticed. The gentleman that he was, Kevin told her that no one had and made sure she was ready for the rest of the screen test. As everyone pretty much knows by now, "The Bodyguard" was a huge hit, earning more than $400 million as well as Oscar nominations for 2 of the songs in the movie

Kevin's story was touching and yet heartbreaking. Some might even say, it was a little unkind to tell. It wasn't bad enough that Whitney is gone, now someone is standing in front of the world telling a story that highlights her flaw of being seriously insecure. At the height of her career, being one of the most popular celebrities in the world, she felt she wasn't pretty enough to pass a screen test. It spoke volumes about how fragile her psyche must have been. I actually think that story alone, was one of the only "true" stories that have been told since her passing. I think Kevin knew very well what he was doing in telling that particular story. He was humanizing her. He said to the world that in spite of all the accolades, awards, money and fame, Whitney was a person, who could be just as scared and full of self doubt as the next person. The demons that we all face were no stranger to her. Perhaps because of her fame and the pressure she felt, they overwhelmed her even more. Perhaps the drugs and alcohol were an attempt to combat the demons and insecurities that she faced. From the outside, we saw a beautiful woman with an even more beautiful voice. For Whitney, she saw someone for whom there was never enough makeup to cover her imperfections.
I've heard and read a number of comments about Whitney this week. Some were kind, expressing sorrow at the loss of such an amazing voice and memories of the joy her music had brought. But too many of them were jokes made regarding her drug addiction and erratic behavior in the later years of her career. I think it's easy to forget sometimes that celebrities are human too. Yes she was Whitney Houston, big singer and movie star. But she was also some one's daughter, some one's niece, and some one's mother. To Kevin Costner she was a friend, and he had no shame in telling this to the world. 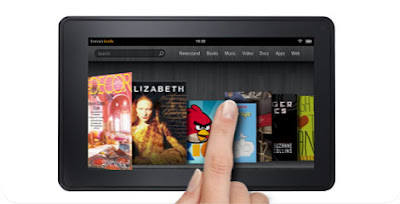 I have a confession to make......I've been cheating on my books. I've started something of an affair with the..... Kindle Fire.       How did it come to this? How did I fall into such an addiction? After all, I was the one who swore up and down that I could not do without real, actual books. I love bookstores, the smell of books, the heft of them, collecting them. I was the girl in the Kindle commercial who says that she likes the satisfaction of folding the page down to mark your place. I'm the person who goes to rummage and garage sales and the clearance rack at Barnes & Noble, searching out a great book bargain. (I even wrote a post where I bragged about buying 32 books.) I have books in every room in my house; they've taken over my nightstand, the top of my dresser, all the book cases, baskets on the floor and the coffee table. I couldn't pass up a book deal. I was in a word addicted, and that became an issue. See, I'm also one of those who doesn't get rid of my books, unless I absolutely hated it. So needless to say, at the rate I was going, I was going to need another house for all of my books. I'm pretty sure Hubby wasn't going to fall for that, so something had to give.

So I started listening when people extolled the virtues of all the tablets available out there. I started looking at the different options in stores, just as a detour on the way to look at something else....I wasn't serious after all. Then right before Christmas, Amazon came out with the new Kindle Fire. Reading a review that likened it to the Apple Ipad, (without the Apple price) is what pretty much sold me.

NOTE - There are a lot of options out there for tablets and I think they all have great features. I will not be debating one against the other here, just listing why I took up said affair with the Kindle.

Things I love about my Kindle Fire:
Posted by Adrienne at 4:05 PM 2 comments: