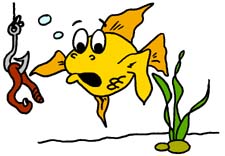 “It was a dark and stormy night” is one of the most famous openings to a book, but probably one of the biggest clichés as well. In today’s writing world that's just not good enough. According to the classes I’ve attended and the articles I’ve read, your opening line needs to "hook" your readers right from the start, or else they’re going to move on to another book and pretty fast.
My friend and I were discussing this concept and wondered if it always held true for the books that have been best sellers, or for the ones that we ourselves had loved. Sometimes when buying books, I’ll pick one based on the plot summary on the back of the book. Sometimes I’m going off of the recommendation of someone else. It’s rare that I will open a book and make my judgment based solely on the first couple of lines. I decided to check out my bookshelf for the opening line(s) of some of my favorites. Based on the opening lines, would I still have chosen to read these books? All of these books intrigued me, shocked me, moved me in some way, shape, or form, but could I say the same of their opening line?

The Handmaid’s tale (Margaret Atwood) – “We slept in what had once been the gymnasium. The floor was of varnished wood, with stripes and circles painted on it, for the games that were formerly played there; the hoops for the basketball nets were still in place, though the nets were gone.” I read this book in college on a dare that I couldn't read it in a weekend....But I have to say the opening (other than wondering why they were sleeping in a gymnasium) did absolutely nothing for me. The first chapter is only two and half pages, but by the end of them I knew I would keep reading, dare or no dare. Anyone who has read this book has to agree that it’s a very scary portrait of what our world could become under the wrong government.

The Lovely Bones (Alice Sebold) – “My name was Salmon, like the fish; first name Susie. I was fourteen when I was murdered on December 6, 1973. In newspaper photos of missing girls from the seventies, most looked like me; white girls with mousy brown hair.” Pretty dramatic opening which hooked me right away. It's a depressing story but have to say that it's very well written.


Bel Canto (Ann Patchett) – “When the lights went off the accompanist kissed her. Maybe he had been turning towards her just before it was completely dark, maybe he was lifting his hands. There must have been some movement, a gesture, because every person in the living room would later remember a kiss.” Odd opening, but maybe just intriguing enough to keep me reading? It was highly recommended to me by a friend and it became one of my favorites, so again is it always the opening lines that convince us to keep reading?

White Oleander (Janet Fitch) – “The Santa Anas blew in hot from the desert, shriveling the last of the spring grass into whiskers of pale straw. Only the oleanders thrived, their delicate poisonous blooms, their dagger green leaves. We could not sleep in the hot dry nights, my mother and I. I woke up at midnight to find her bed empty. I climbed to the roof and easily spotted her blond hair like a white flame in the light of the three - quarter moon.” Ironically this story begins with another big no-no which is weather. Who knew right? And yet there was something about the voice of this character that made me want to keep reading.......that and the poisonous flower......
Divine Secrets of the Ya-Ya Sisterhood (Rebecca Wells) – “Sidda is a girl again in the hot heart of Louisiana, the bayou world of Catholic saints and voodoo queens. It is Labor Day, 1959 at Pecan Grove Plantation, on the day of her daddy’s annual dove hunt. While the men sweat and shoot, Sidda’s gorgeous mother, Vivi, and her gang of girlfriends, the Ya-Ya’s, play bourree, a cut-throat Louisiana poker, inside the air-conditioned house. On the kitchen blackboard is scrawled: SMOKE, DRINK, NEVER THINK – borrowed from Billie Holiday.” Okay, now this one had me hooked on reading it just on the intro alone…..Plus, I always wanted to be a southern gal…. :)

So, to acquire some help with my opening lines, I’d like to know - the books you’ve read and loved – did they have an amazing or just so-so opening? Was there a book with a great opening that you didn’t end up loving? I'd appreciate your opinion on the "hook."