Way too much coffee.  But if it weren't for the coffee, I'd have no identifiable personality whatsoever.  ~David Letterman

My name is Adrienne and I am addicted to.........coffee. It has now been four days without coffee and I feel....decaffeinated? In an effort to add some healthy choices to my life I decided to forgo it during the week, allowing myself to only have it on weekends. Now if you read my profile you know that I love coffee.....Cafe Lattes, Mocha Lattes, Caramel Macchiatos, Java, Joe, Cup of Ambition....whatever you need to call it, I need to have it. 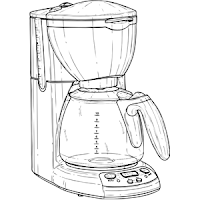 In my previous days I would start my weekday mornings with two cups at home, followed at work by at least one, possibly two (depending on the depth of my exhaustion.)
Some (rare) mornings I would treat myself by stopping off at a local Starbucks for a Tall Pike's Place with a shot of caramel.....Heaven, I'm in Heaven....but I digress.

Sunday mornings would begin with at least one cup at home, followed by a pot at our local breakfast haunt....followed by a day of nervous energy and not in a good way. I knew I may have a problem when I friend recently introduced me to Stokd Coffee Shots. They're shots that come in tiny creamer sized container. Basically it's the equivalent of adding a shot of espresso....to your coffee. Are you sensing my issue? I know a few people who are able to begin their days with nothing caffeine related...and I'm still not entirely certain they are human. (I'm just kidding - you know I love you all, just jealous is all.)

So as a step toward improved health I have decided to attempt Herbal Teas.....according to the hype it gives you the same mental stimulation without the jitters. My morning now begins with a cup of Gogi Berry Pomegranate Green Tea (by the way...I'm exhausted just saying it.) When I arrive at work there is a cup of Morning Thunder (I kid you not on the name - it actually has a Buffalo on the package. If that isn't stimulating, I don't know what is.)

So after four days I'll admit I'm not jittery but I can't say I'm bright eyed and bushy tailed either....but I am going to grind (no pun intended) away at this.....anyone have any advice, tea recommendations, permission to resume said addiction???
Posted by Adrienne at 3:36 AM