A Tale of Two Mascaras.....
Among the other obsessions that I've previously noted, and am currently seeking treatment for, makeup ranks close to the top of the list. However, I won't buy something unless it's on sale or have a coupon. Typically I won't buy a high priced makeup product, unless it's something that I have heard rave reviews about and will last a long time.
I also tend to go through periods of boredom, where I want to try something new and when there's a good price involved, I'm more willing to take a chance. Recently I did that with mascara. My typical choice for mascara has always been the old stand by of  Maybelline Great Lash. It's been around forever and it makes the list of favorite beauty products every year and for good reason. 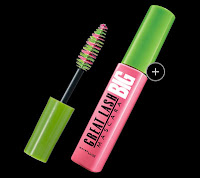 But every now and then, I wonder if there isn't something else out there that I'd like even better. So, when Avon had a big sale recently I decided to check out their mascara collections. They had a deal where you were able to mix and match 2 of their speciality mascaras for $6.99. If you've purchased mascara lately then you know that's a pretty good deal. Most mascara now starts at that price for just one.
My 2 choices were SuperCurlacious (just the name is fun!) and Super Shock (hoping as the title implies, that my lashes would be shocked into looking more full.). I've always thought the length of my lashes was okay but their fullness leaves something to be desired.
I tested SuperCurlacious first and my hope was that I would no longer need my eyelash torture curler, as the product claim is that it will make your lashes 200% curlier for 12 hours. I have to say that I was pleasantly surprised how much they did curl without the torturer, er...curler. But sadly, while they did curl my lashes, it did nothing for the extreme sparseness of them. In fact I could barely tell that I had mascara on. It almost seemed as though the mascara dried too quickly, preventing the buildup you would get from a couple of coats. I purchased both mascaras in brown and am also wondering if the color was too light. Overall, I think the mascara did what it promised in terms of the curl affect, but I think I will save this for the low key days, when I'm going for the "I'm not wearing any makeup" look.
SuperCurlacious

SuperShock promises 12x the volume, which is what I was really hoping for. Now this product I think truly lives up to it's promise as it took barely 2 coats to make them look much fuller than normal. The brush on this mascara is HUGE though, which will take some getting used to. The other problem is that with a brush this big, it holds A LOT of mascara on it. So you need to spend A LOT of time trying to wipe the excess off before applying it, otherwise you'll end up with clumps (check out my 2nd picture below). Normally I don't wear mascara or just a very tiny amount on the bottom lashes, but as I am testing a product I wanted to give it a full review, so excuse the messy look! I think the first picture better shows the effectiveness of the product.
Super Shock

So, one slight thumbs down and one thumbs up...not bad. I think I'll use the Supershock for the times I really want my lashes to stand out and stick with my Maybelline Great Lash for my day to day look.

So, what about you? Are there any makeup products that you can't live without? Something new you tried and loved? Share, Share, Share!!!~ Adrienne
Posted by Adrienne at 5:58 PM