Writing this blog and looking for topics, has made me realize that life is one, big learning process. It can be hard to see this if you don't take a minute to reflect on things. So here's what I learned this week...... 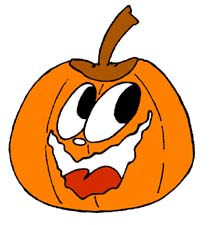 Lesson #1 - Compatible couples are rare. Hubby and I are very lucky to have a variety of friends between the two of us. People who have been there with us through hard time and good times, who we've made numerous memories with. In some of those cases, they may be just individual friends that we've both developed over the years. However, sometimes you're lucky enough to have couples who you have a great connection with. We've been very lucky to have a number of those in our life. I realized it in particular this week when we spent 2 different days with Instigator and his girlfriend. Hubby has known Instigator since he was a kid and we've gotten to know his girlfriend over the past couple of years. We have similar interests, senses of humor and genuinely just like hanging out. Last Sunday we made our 2nd annual trip to find the perfect pumpkins, apple cider donuts, pumpkin beer and a little wine tasting thrown in. The day ended with an amazingly yummy dinner. It was such a relaxing, fun day. We commented at one point that it was just easy - no one cared if we made an unexpected stop, changed the schedule, or took forever to decide on a pumpkin.The hardest part of the day was when hubby and Instigator couldn't decide what kind of pizza to order. Friday night they joined us again for dinner and a Sabres game and it was just as fun. Good friends are a gift.....good couples are priceless. :)
Lesson # 2 - When someone does a good job - say it! 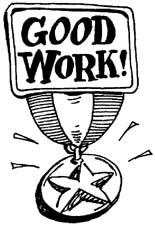 When someone messes up in customer service, it's very easy to complain and be angry. When someone does a good job, or better yet, goes above and beyond, you may think to yourself "that was great!", but how often do you do anything more? We have a vendor at work who we deal with on a weekly basis. It doesn't matter what our request or need is, our representative is always there for us. She doesn't just give you information on how to fix a problem, she just steps in and does it for you. She's fun and friendly, with no formal pretenses. She calls to check on us, brings us lunch and genuinely likes helping us out. So this week, after she went above and beyond (again), I sent an email to her boss, telling him how much we appreciate everything she does and how refreshing it is to work with someone who cares so much about customer service. He responded that they were indeed very lucky to have her. Now, whether she'll get anything more than a pat on the back, I can't say. But if nothing else she knows that she is appreciated and hopefully that counts for something. 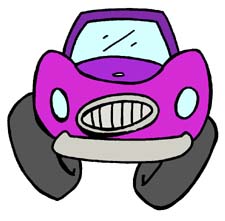 In the past month, there have been a rash of incidents involving vehicles running into buildings in our area. Everyone is wondering what's causing the sudden increase and I have a theory.....people are doing everything in their car these days......except for just driving. One day while sitting at a red light I decided to count the number of cars going by where the driver was doing something besides just watching the road in front of them. More than half were doing something else; texting, talking on the phone, attempting to reach something in the seat beside/behind them, eating or strongly focused on the other passengers in the car. We've become such a multi tasking society that it's considered boring or weak to just simply drive. Anytime when I've had a near miss recently, I've noticed that the driver was usually on the phone or looking down, indicating they were probably texting. Just last month my car was hit from behind while I sat at a stop light. Luckily no one was injured and the damage was minimal, but when I looked up to see what had happened, I could see the driver quickly putting something down. At this point, I am truly amazed there aren't more accidents. I for one make it a point to not talk on the phone or text while driving. Even if it wasn't against the law here (which it is), I still wouldn't do it. I am just not coordinated enough to pull off such a feat and I'm pretty sure most others are not either but wouldn't admit to that. The fear of causing an accident or worse is just too much stress for me. So I'm begging you guys - please hang up the phone, wait to put the makeup on at work, eat breakfast before you leave the house and put on your seat belt!!!! 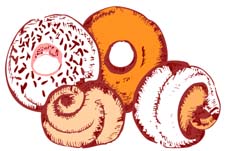 Lesson #4 - Sometimes you just need to eat the cake.....or the doughnut.
Recently I modified the way I eat in an effort to be more healthy and hopefully lose some weight in the process. I won't call it a diet, as this is something I hope to carry on as a way of life. One of the main changes was giving up sugar or at least cutting out as much of it as possible. This has meant saying no to A LOT of birthday cakes at work, doughnuts brought in by generous co-workers, and dessert at family dinners. Since August I've lost roughly 10 lbs and am feeling pretty good, so for the most part it's been easy to stick with. Last week we got into a discussion at work about the wonder of Fall foods like apple cider and donuts. We decided that having a celebration of cider and donuts on Friday morning would be a great way to celebrate the season. I felt guilty as I had that pumpkin spiced doughnut and later on the yummy dark chocolate cookies that someone else brought in. But the feeling faded as I laughed with my friends and just enjoyed myself. I'm sure when I do my weekly weigh in this week, that I won't have lost anything (the beer, wine and apple cider doughnut from last Sunday surely did not help), but I also don't think the 2 instances will set me back 10lbs. My new way of eating has made me look at everything I eat and consider whether it is really worth having. So giving in to weekly cake and dessert offerings may not be worth the cheat but eating the doughnuts and laughing with my friends on Friday morning was absolutely worth it.

So, those were my life lessons for the week - what did you learn??